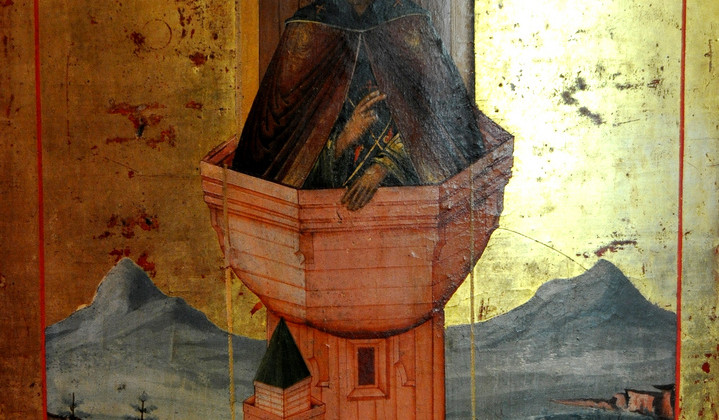 Hermits and Monks sought simplicity and solitude, yet they always seemed to struggle to achieve their goal.  Were they right to isolate themselves or should they have immersed themselves in their communities?  What can we learn from them?

For early 3rd and 4th century hermits and monks, celibacy and fasting were givens, practiced by all, but some took it to great lengths, going to extremes of self-denial. After Constantine stopped the persecution of Christians this asceticism became for some, a form of martyrdom. Simeon the Stylite spent 37 years living on top of a pillar, another hung upside down in a barrel and others lived in caves too low to stand up in.  Were they taking ‘dying to themselves’ just a little bit too far? When his mother died, Simeon asked that her body be brought to his pillar so he could bid her farewell.

What is admirable about these early hermits is their total dedication to the Lord and their willingness to forego earthly pleasures or even normal family relationships.

‘A monk was told that his father had died. He said to the messenger, ‘Do not blaspheme. My Father cannot die.'”

– Evagrius, From ‘The sayings of the Desert Fathers’

Hermits and monks lived by asceticism, the idea that through renunciation of worldly pleasures it is possible to achieve a higher spiritual or intellectual state. They tried hard to shun worldliness, have no possessions, live frugally, renounce materialism and seek the heavenly, not bodily comfort.

The biblical basis seems to be based on John the Baptist who lived in the desert (Matthew 3:1-4) and on Jesus himself who spent 40 days and nights fasting in the desert. (Matt 4:1-2) The command of Jesus to sell all you have and give to the poor (Matthew 19:21) also influenced the early founders of monasticism.

In light of this, many sought solitude (the word “Monk” comes from the Greek “monachos”, meaning ‘Solitary’). However they attracted followers, and therefore were rarely able to be alone! Simeon thought that living on a pillar would separate him from people, however it attracted even more followers. We can imagine it: “hey, come and see this holy dude who lives on top of a pillar!” Something about holy men attracted others.

In fact, Simeon could not have lived on a pillar without the support of those who brought him food and water. As time went on hermits had to agree rules for living together but in solitude, which ultimately led to the formation of monasteries. Jesus often sought times of solitude for prayer, but he spent more time with his disciples and those who followed him, teaching them how to love one other. Interestingly, Jesus prayed that his followers would not be taken out of the world (John 17:15-16). His great commission (Matthew 28:19-20) was for his disciples to go into all the world and make disciples.

Today few seeking the ascetic life live in utter independence. Interdependence is a hallmark of Christian faith, both inside and outside of monastic orders.   Personally I don’t think that many of us are called to live in isolation, I think we were created for relationship with each other and with the Father. It’s interesting how God caused people to seek the hermits out so they weren’t alone! The hermits sought isolation so that they could fully concentrate on God without any distractions or temptations.  People sought them out because they were Holy men who were considered to be close to God and perhaps that gave them hope.

I have to admit, as a busy church leader with a family and a full time job, there are times when getting alone by myself without any other people or distractions so I can spend quality time with God is important.  However I don’t think I could live the life of a hermit as I’d miss interaction with other people.  Perhaps I could survive a few weeks in a monastery, but I fear that I would find it restrictive and I don’t have the discipline for that type of lifestyle.  For some being a monk is a calling, but it’s not for everyone.

To be fair to the monks, many of them did the work of evangelists and were responsible for spreading the gospel across Western Europe and beyond. St Patrick and St Columba are good examples.  Monks have played an integral role in the growth and development of the church. Monasteries became important centres for study, learning and education; they became preparation grounds for Bishops and acted as centres of evangelism.  Monks helped to uphold Christian values against corruption, power and wealth and provided pastoral care to the poor the sick and the needy.

Through our relationships we learn to live together and we discover God’s grace. We become mature as Christians by learning to live together, bear with one another, forgive each other and share life together. Early hermits and monks sought to separate themselves from the world in order to pursue a life of prayer and holiness in an uninterrupted way. They offer us an extreme and challenging example of life based on simplicity and sacrifice. However there are many other reasons to stay ‘within’ society. There we can more deliberately and permanently live out lives of justice, compassion and self-sacrificial care.

Latest posts by TimP (see all)